This is a very deeply healing incense, infused with the protective, mother goddess, banishing and purifying smoke of the Tara, the “Mother of all Buddhas.” OM TARE TUTTARE TURE SVAHA

Tara healing incense has been used for centuries and is used as the traditional Tibetan medicine for stress, depression and tension. It is mixed by hand according to the ancient Tibetan Medicine system and is composed of 31 different pure and natural herbs.

Tārā (meaning “Star” or “Saviouress”), also known as Jetsun Dolma in Tibetan. ārā is regarded as a Buddha of compassion and action. She is the female aspect of Avalokitesvara and in some origin stories she comes from his tears that were shed in pity as he observed the vast suffering in the world. Tara encompasses all the powers of an Enlightened Buddha, yet remains in the worldly realm to assist others with her compassionate actions. She is said to swiftly come to the needs of those in distress when her mantra is spoken, although sometimes only a simple thought is needed (Willson, 21). Tārā may also take on a plethora of different roles and forms within this capacity. Tārā is actually the generic name for a set of Buddhas or Bodhisattvas who may be understood as different metaphors for Buddhist virtues. The iconography of each of these representations is distinct. A practice text entitled In Praise of the 21 Tārās, is recited during the morning in all four sects of Tibetan Buddhism. Tārā has 21 major forms, each tied to a certain color and energy, and each offers some feminine attribute of ultimate benefit to the spiritual aspirant who asks for her assistance. The most widely known forms of Tārā are:

Tārā is best and most widely known as Green Tārā (young, compassionate, and peaceful). Green Tārā offers comfort and protection from all the unfortunate circumstances one can encounter within the samsaric world. Another common Tārā, White Tārā, is more mature and specializes in matters of health and longevity. She expresses maternal compassion and offers healing to people who are hurt or wounded, either physically or mentally. At her most fierce, she is the four-armed Red Kurukullā Tārā who is paradoxically subjugating and magnetizing, violent and seductive. Red Tārā teaches discriminating awareness about created phenomena and how to turn raw desire into compassion and love. Blue Tārā (Ekajati) is a protector in the Nyingma lineage, who expresses a ferocious, wrathful female energy whose invocation destroys all Dharmic obstacles and engenders good luck and swift spiritual awakening.(Beyer)

A central aim of Tantric practice is to visualize becoming the deity one is focused on. In meditation, one strives to take on the body of the deity, and embody that deity’s enlightened perspective. If one seeks to identify with Tārā and seeks to mold oneself after her, this means emanating an unwavering compassion toward all other beings.
Worship and Sadhanas of Tārā

Worship of Tārā can involve the use of prayer, chants, mantras, and visualizations, depending on the level of the practitioner. Two ways of approaching Tārā are common. First, lay practitioners directly appeal to her protective nature by invoking her mantra. Tārā’s mantra is widely known as, Om Tare Tuttare Ture Svaha (meaning “One who saves, save me”). The mantra is said to ward off fears or dangers, especially those outlined in the eight terrors. There are countless stories of people who were beset by danger and certain death, but gained Tārā’s protection and were saved after crying out her name or reciting her mantra. One must thoroughly contemplate a mantra to be able to apply it successfully; often this requires extensive ritual service to the deity. Merit must be accumulated, and recitations of a mantra may be recommended in the tens or hundreds of thousands. All faults or interruptions in recitation must be made up for by further recitations. Faults are characterized by reciting improperly, too slowly, too quickly, too softly, or in an incoherent manner. Interruptions may include coughing, sneezing, falling asleep, stumbling, or allowing the mind to wander. Indications that one’s mind has been adequately prepared through this ritual service to the deity come in the form of twelve signs. These signs include feeling little hunger or thirst, feeling free of fatigue, feeling free of illness, and feeling pleasant warmth as one’s body begins to glow. Also, one’s understanding grows, comprehension of scripture progresses, and dreams are promising and come true. One feels no reluctance towards reciting the mantra and is instead inclined towards doing so. Finally, not only does one willingly strive toward preserving such qualities, but one’s devotion to the patron deity becomes great (Beyer, 244). Magical powers may also indicate contemplative mastery, signaling attainment of great merit. These magical attainments may include invisibility, invincibility, youth, levitation, instant self transportation, and domination over all other things, as well as many other godly powers (Beyer, 246). The speaking of such a mantra is so central and important in practice that it holds tangible power itself, detached from and beyond the deity (Beyer, 242). Beyond its spoken use, Tārā’s mantra may also be carved into a substance to ensure continual protection.

A second way to approach Tārā consists of visualization practices, which are used by monks or Tantra Yogis in order to develop Tārā’s qualities in themselves, ultimately leading to Enlightenment (Beyer, 236). Visualization is a very important process in invoking Tārā for protection; it is through this method that an object may become a vessel for the protective power of Tārā. Visualization is often characterized by visualizing oneself as the deity, in as detailed a manner as possible; the power of the deity can thus be invoked. For specific reasons, one may want to visualize a particular variation of Tārā, to suit a specific need. Therefore, if one desires health and longevity, White Tārā should be the subject of visualization, and alternatively a devotee may use Red Tārā as the subject of visualization for subjugating, or Yellow Tārā if he or she desires to increase their wealth. The accompanying mantra would also be altered accordingly. In this manner, a devotee may use the basic components of praise and devotion to Tārā, recitation and visualization, and apply it to any problem that is encountered (Beyer, 242).

Sadhanas in which Tārā is the yidam (a deity chosen as a focus for meditation) can be extensive or quite brief. Most all of them include some introductory praise or homage to invoke her presence, followed by prayers asking her to grant refuge. Then Tārā’s mantra is recited, followed by a visualization of her, perhaps more mantra, then the visualization is dissolved, followed by a dedication of the merit from doing the practice. Additionally, there may be extra prayers about personal aspirations and a long life prayer for the Lama who originated the practice. Many of the Tārā sadhanas are seen as practices specifically within the world of Vajrayana Buddhism. However, what is taking place during the visualization of the deity actually invokes some of the most sublime teachings of all Buddhism.

During meditation, Tārā is seen as having as much reality as any other phenomena apprehended through the mind. By reciting her mantra and visualizing her form, it is said that one can become open to her energies of compassion and wisdom. After a period of time, the practitioner is thought to become filled with all that her being represents. One simultaneously becomes inseparable from all her good qualities and realizes the emptiness of the visualization of oneself as the yidam. One dissolves the created deity form and at the same time realizes how much of what we call the “self” is a creation of the mind, and has no long term substantial inherent existence. This part of the practice is preparing the practitioner to be able to confront the dissolution of oneself at death and ultimately be able to approach the realization of Ultimate Truth as a vast display of emptiness and luminosity. At the same time, the recitation of the mantra has been invoking Tārā’s energy through its Sanskrit seed syllables and this purifies and activates certain chakras. This also untangles knots of psychic energy which have hindered the practitioner from developing a Vajra body, which is necessary to be able to progress to more advanced practices and deeper stages of realization.

The end results of doing such Tārā practices are many. It reduces the forces of delusion in the forms of negative karma, sickness, afflictions of kleshas, and other obstacles and obscuration. The mantra helps generate Bodhicitta within the heart of the practitioner and purifies the psychic channels (nadis) within the body allowing a more natural expression of generosity and compassion to flow from the heart center. Through experiencing Tārā’s perfected form, one acknowledges one’s own perfected form, that is, one’s intrinsic Buddha nature, which is usually obscured and clinging to dualistic phenomena as being inherently real and permanent. The practice weans one away from a coarse understanding of reality, allowing one to get in touch with inner qualities similar to those of a Bodhisattva. It prepares one’s inner self to embrace finer spiritual energies, which can lead to more subtle and profound realizations of the emptiness of phenomena and self. 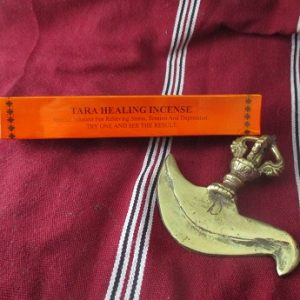